You can bleed out from a severed limb in under 5 minutes.

The human body has between 4.5 to 5.5 litres of blood, on average. Bleeding needs to be stopped ASAP.

After a shark has mauled a person, arresting the blood flow can seem a superhuman order.

Dr. Jon Cohen, an honours degree medical doctor with advanced training in Emergency Medicine, is a member of Surfing Doctors, and has an abiding interest in making the seeming impossible possible.

This Canadian-born doctor recalls a course he attended, called Stop The Bleed that emerged in response to mass shootings in the U.S. The American College of Surgeons designed the course for lay people.

The criteria for a life-threatening bleed were described in the course as follows:

“If any of these apply,” Dr Jon says “all you have is direct pressure. Do that. Press straight on the wound to stop the blood coming out.”

What can you do?

First Aiders and medical personnel are trained for this. But what can the average Australian do?

Dr. Jon Cohen says immediate access to a tourniquet “is kind of the holy grail in terms of preventing loss of life. Once the tourniquet’s on, you’ve got at least 3 hours… probably more, before the tourniquet starts to damage the victim.”

He has, as a consequence, invested time and money into tourniquet design. And what he came up with is the Calm As Shark Attack Slam Pack — a purpose-built kit for anyone faced with the gnarly task of stemming blood loss after a shark attack.

The kit is designed for immediate action to achieve just one goal: stop the victim bleeding out. It comes in a small waterproof knapsack that can be brought to the beach with little more effort than it takes to bring sunscreen and board wax.

Confronted with a shark attack victim who’s losing blood at a rate of knots, the idea is to “slam that pack out”. Only essential First Aid items will emerge — most notably, a tea towel-sized piece of fabric with printed instructions.

“It’s the simplest thing you can do,” says Dr Cohen, “to save someone’s life.” 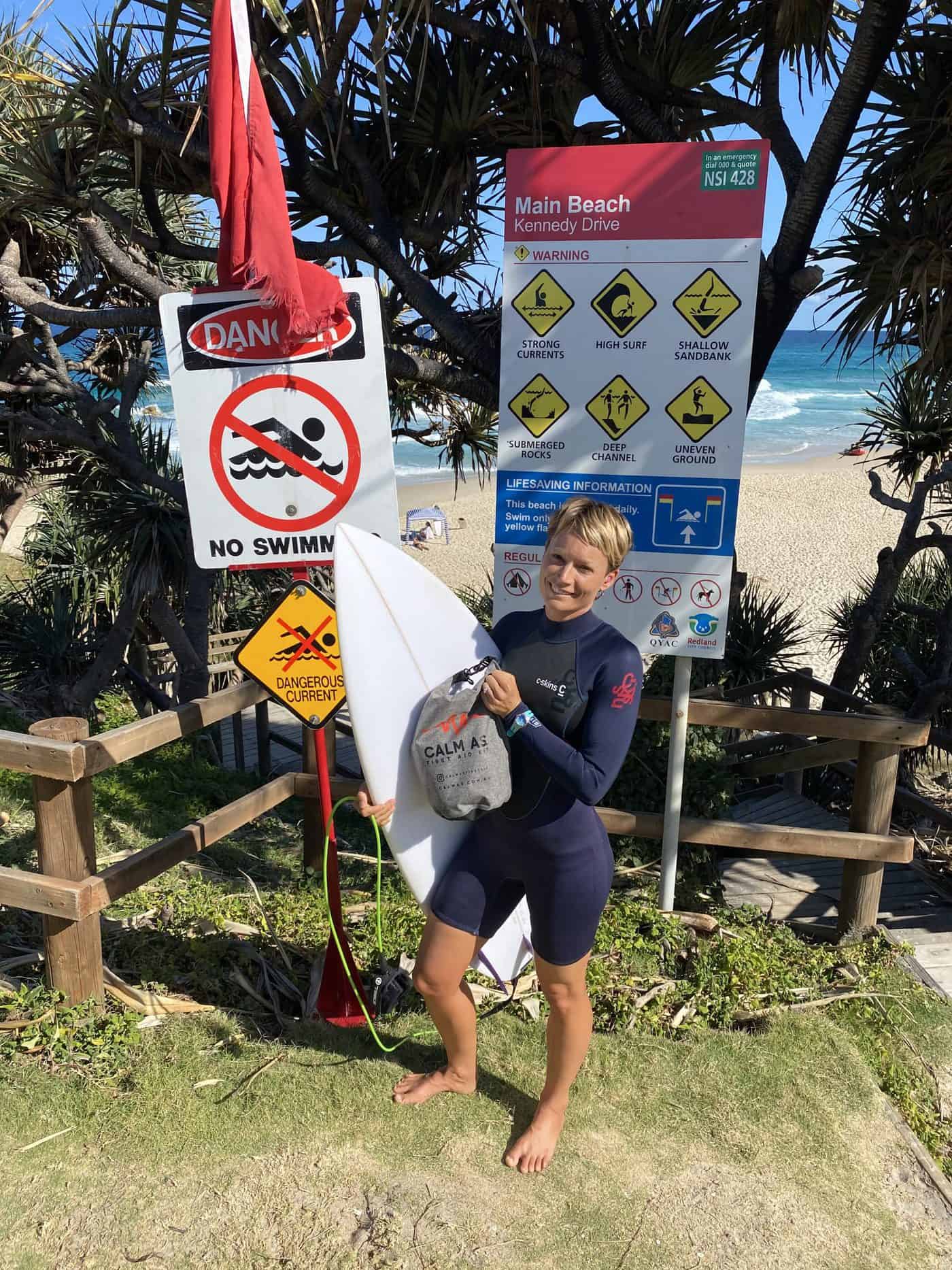 What’s in the Calm As Shark Atack Slam Pack?

A First Aid kit is only as good as its accessibility. The Calm As kit compact enough to fit stow on a jet ski. Rugged enough to live in your car or boat, it’s built for glove-boxes and PWC storage bins.

Inside the waterproof roll-top bag are Australian TGA-approved, hospital- and military-grade components:
• 2-sided waterproof instruction card — step-by-step shark bite management on one side; step-by-step arterial tourniquet activation on the other.
• 1x SWAT-T tourniquet — designed for ease of use, super durable, and pocket-sized so you can have it with you in the water.
• 1x SiCH tourniquet — easy to use windlass tourniquet, designed to handle extremes of temperature and exposure to the elements.
• 2x 20x20cm hydrophobic “combine dressings” to cover gaping wounds, keep them clean, and stem bleeding until help arrives.
• 1x elastic dressing to secure the combine dressings in place.
• 6x XL, Ultra heavy duty combat nitrile gloves. 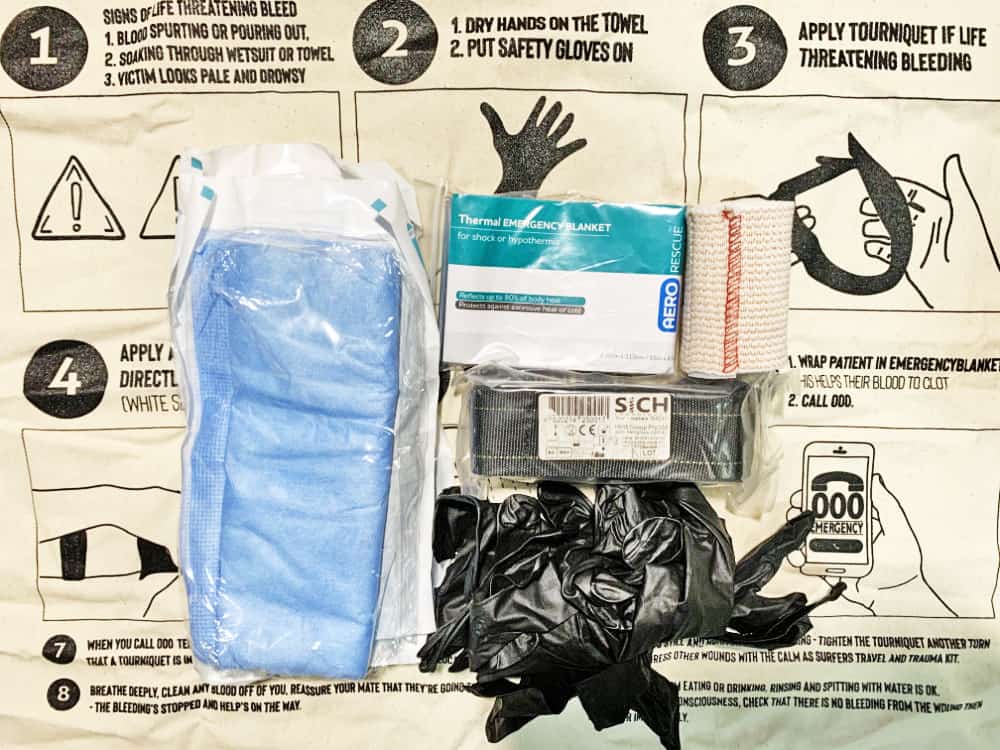 This Slam Pack First Aid kit is a one-trick pony. But stopping saving someone who’s been mauled by a shark is a trick even Harry Houdini would have applauded.

When the unthinkable happens, the purpose-built products in this kit gives any responsible person a jump-start to take a first-responder role.

Here’s a quote from the website where you can buy the game-changing Calm As Shark Bite First Aid Slam Pack:
Lifetime replacement warranty – if the worst ever comes to pass and you need to use this kit on a loved one or a random on the beach, you’re a legend and we would be honoured to shout you a replacement (and a beer, of course). 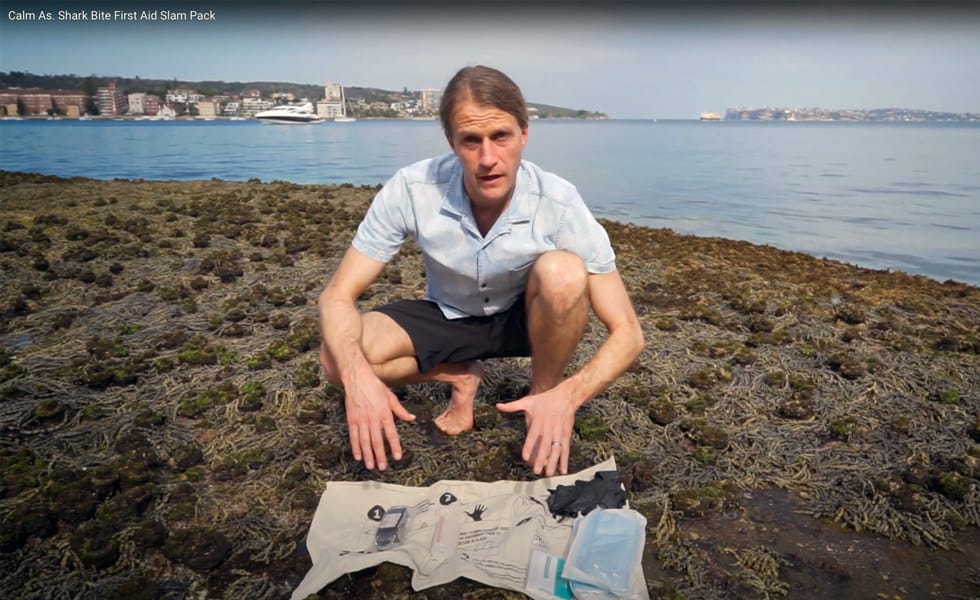 Defending an attack by a shark

When a shark is intent on attacking you, grab any available weapon — a paddle, a diving knife. Aim to strike at its eyes and gills. If no weapon is available, you’ll need to gouge at these vulnerable areas using your hands.

Striking the snout, another sensitive spot, could get a result for you, but it’s also perilously close to those razor-sharp teeth.

If you are bitten, apply pressure directly to the wound to stop the bleeding. Try to leave the water as quickly as possible by swimming on your back. Make sure others are warned, and seek medical help once you’re out of the water.

What to do when you witness a shark attack

Alert a lifeguard. Any rescue attempt is best by boat. The Hollywood shark rampaging onto the deck of a boat is pure fiction. 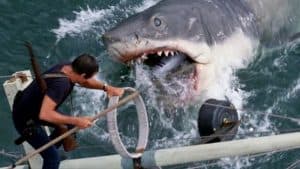 A scene from the movie, Jaws, directed by Stephen Spielberg.

Do not put yourself at risk if no lifeguard or boat is available.

Assuming you’re in a position to do so, help the victim out of the water as soon as possible. Arrest the bleeding by applying pressure directly to the wound.

If you paid attention to our earlier advice, follow the directions that came with your Calm As Shark Attack Slam Pack.

Keep the person still and wrap them in towels to keep them warm, in case of shock. Dial 000 for medical assistance.