Australia is home to some of the world's most venomous spiders.

For other spiders, the toxicity of the venom alone may not be enough to cause serious mortality. However, it may cause a severe allergic reaction, otherwise known as anaphylaxis, and lead to swelling and obstruction of a person's airways. In the instance that you are bitten by one of these spiders, you should monitor for signs of deterioration and seek medical attention accordingly.

Below, we will be covering the 10 most venomous spiders in Australia, including the key details relating to their appearance, behaviour, and habitat, and what to do if you are bitten by one.

Why do Spiders Bite People?

It is important to remember that spiders will not go out of their way to bite you. Spiders typically feed on other small invertebrate like flies and mosquitoes, and so their behaviour and body is not geared to take down large mammals.

As such, they tend to run away when they sense the heavy vibrations of a human. It is only when they are surprised or threatended and feel the need to defend themselves that they will bite.

As Chris Buddle, an Associate Professor of Insect Ecology at McGill University says: "They are far more afraid of us than we are of them."

Distribution: Sydney Funnel-web spiders are found in New South Wales. They are typically found in forests and urban areas, and they have been known to frequent backyards and swimming pools.

Behaviour: Sydney Funnel-Web spiders are aggressive when they feel threatened.

There are 40 species of Funnel-web spiders in Australia, though only six can cause severe envenomation. Funnel-webs are most active during the warmer months, from November through to March.

Behaviour: Funnel-web spiders are aggressive when they feel threatened.

The bite from a Redback spider can be life-threatening to a child, but it is rarely serious for an adult. For instance, approximately 2000 Redback spider bites are recorded each year, though only about 250 casualties receive anti-venom.

Distribution: Redback spiders are found in many habitats across Australia, including urban areas. They often try to hide in dry, sheltered places such as garden sheds, mailboxes, and under toilet seats.

Behaviour: Redback spiders are nocturnal and only bites from females are dangerous.

There are 8 species of Mouse spider, and they are all found in and around Australia. Only one case of severe envenomation has been reported. Funnel-web spider anti-venom has been found to be effective on Mouse spider bites, as the two bites are similar and are treated with similar caution.

Distribution: Mouse spiders are found throughout Australia. They are normally found in burrows near waterways and occasionally in suburban areas. Their burrows feature 2 surface trapdoors almost at right angles to each other. These silk and soil trap-doors are well-camouflaged and so make for an ingenious trap.

Behaviour: Mouse spiders are typically lethargic and rarely aggressive. They prefer to be active during the day. 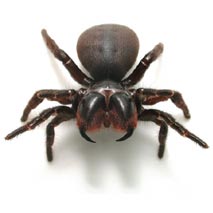 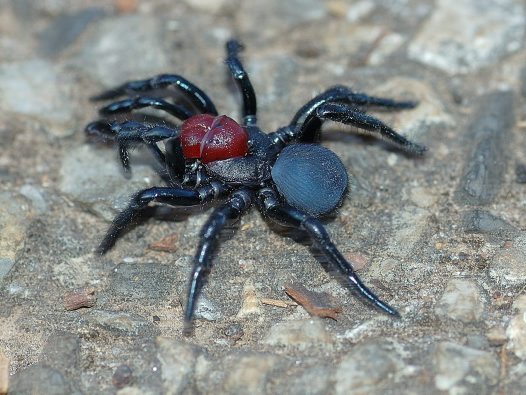 A bite from a Trap Door spider will generally only cause minor symptoms such as localised pain. However, their venom can also sometimes cause nausea, lethargy, and malaise. Trap Door spider bites are similar to those of Funnel-web spiders, and so they are treated with similar caution.

Distribution: Trap Door spiders are found throughout Australia in natural and urban environments.

Behaviour: Trap Door spiders are aggressive when they feel threatened.

Recent studies show that the venom of the White-tailed spider causes no major danger to humans and is limited to mild localised pain.

Distribution: White-tailed spiders are found in natural and urban areas across Southern Australia, from Southern Queensland to Tasmania and from the east to west coast of Australia.

Behaviour: White-tailed spiders are active at night, during which time they wander around hunting other spiders.

Australian Tarantulas are non-fatal to humans. However, they can render painful bites because of their large fangs. And while symptoms like vomiting and fever are rare in humans, a bite from an Australian Tarantula can be fatal to dogs.

Distribution: Australian Tarantulas are found in Queensland, New South Wales, South Australia, and Western Australia. Some species can also be found as far south as Victoria.

Behaviour: Their prey usually consists of insects, lizards, and frogs, but they have been known to prey on bird hatchlings. Australian Tarantulas are also known as whistling or barking spiders, as some species can make sounds by rubbing their front limbs against their jaws.

Recluse spiders have potentially dangerous venom that can be haemotoxic and damaging to the skin and blood. No cases of envenomation from a Recluse spider have been reported in Australia.

Behaviour: Recluse spiders are not inclined to bite.

Huntsman spiders are reluctant to bite and are more likely to run away when approached. Their venom isn’t considered dangerous to humans. However, they are known to cause dangerous accidents when they surprise people in the house and car.

While the bite from a Common Garden Orb Weaver spider can generally cause only minor effects, such as localised pain, they are aggressive and the most common species of spider to bite.

Behaviour: Common Garden Orb Weaver spiders are highly aggressive and are likely to bite when disturbed. They are active at night and so hide in sheltered places during the day, such as under leaves or in clothes on the washing line.

Signs and Symptoms of a Funnel-web Spider Bite

It is important to note, any bite from a large (i.e. greater than 2 cm) dark coloured spider in parts of NSW or South East Queensland should be treated as a possible bite from a Funnel-web spider.

Signs and Symptoms of a Redback Spider Bite

Any bite from a large (i.e. smaller than 2 cm) spider or a light-coloured spider should be treated as a possible bite from a Redback Spider.

If the casualty begins exhibiting signs of a severe allergic reaction, otherwise known as anaphylaxis, call Triple Zero (000) for an ambulance, follow the Australian Resuscitation Council's anaphylaxis treatment guideline, and follow DRSABCD and be prepared to perform CPR.

If you would like to learn about the first aid treatment for other bites and stings, including those from snakes, fire ants, and marine life, head to our Resource Library.

What is Sudden Death?