Australia is the deadliest place in the world when it comes to shark attacks, recording more than 700 unprovoked shark attacks since 1900.

Around 170 (more than 40%) of the world’s 400-plus species of shark can be found in Australian waters — including all 12 of the shark species known for unprovoked attacks.

Surfers are most at risk and the world’s largest shark management program has been established in New South Wales.

This eastern state is now upping the ante, with Agriculture Minister Adam Marshall announcing, in November, 2021, “Every surfer in NSW will now have access to first-aid training through Surfing NSW’s Surfers Rescue 24/7 program.”

The program will deliver customised medical kits and first-aid training to more than 110 NSW board-rider clubs and 55 surf schools.

The new trauma first aid kits draw their design inspiration from equipment developed around the world by military, law enforcement and ambulance agencies.

The kits contain trauma/bleeding control equipment, multiple hypothermia blankets and equipment for fracture management and basic first aid (minor wounds). They also include the TacMed QuikLitter Lite — a vacuum-sealed soft litter that folds out and enables the casualty to be carried from the beach.

“Oftentimes, you have 3 to 5 minutes to stop the bleed. These kits provide simple tools that are backed by years of successful battlefield medicine data and can ultimately assist in saving a life.”

Surfing NSW will roll out the technology and the training. Surfing NSW CEO Luke Madden says, “I think I speak for a lot of surfers in this state when I say that we’re grateful for this support that will ultimately benefit all NSW surfers.

“Every one of us wants to make sure we have the skills and tools we need so that if the worst happens to one of our mates, we can do everything we can to save them.”

Surfing NSW will also gain another 20 or so drones to add to the fleet of shark-spotting drones already delivered by Surf Life Saving NSW. 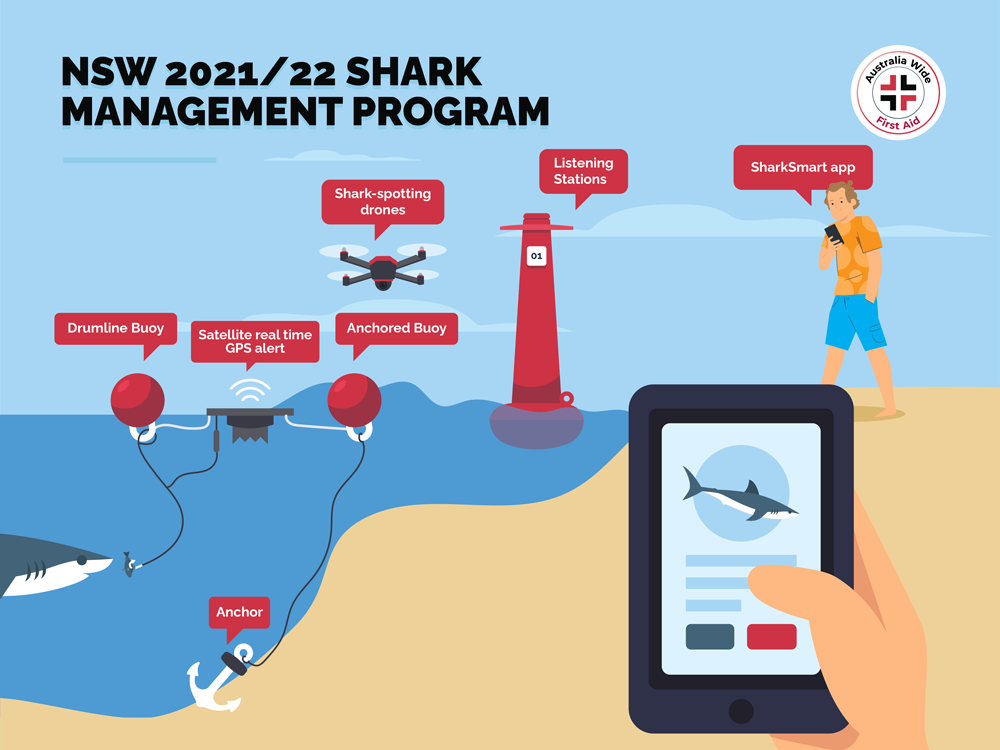 The NSW Government has committed $21.4 million to its 2021/22 Shark Management Program, which includes:

Shark Spotting from the air

Following successful trials in 2017/18 and 2018/19, shark-spotting drones will again operate during the summer of 2021/22. Surf Life Saving NSW and the NSW Department of Primary Industries jointly selected to fly them at the following 18 beaches:

What is a SMART drumline?

‘SMART’ is an acronym for Shark Management Alert in Real Time.

This technology intercepts target sharks beyond the surf break. Once caught, they are tagged and relocated 1km offshore. ‘Target sharks’ are White, Bull and Tiger sharks — the species responsible for most shark bites in NSW.

The SMART drumline is set about 500 metres offshore. It is secured by an anchor and supported at a depth between 8 to15 metres of water by two buoys.

A satellite-linked GPS communications unit is attached to a hook, baited with sea mullet. If the bait is taken, an alert is sent to notify personnel.

The team responds by tagging and releasing the shark or other marine animal.

SMART drumlines are not left overnight. They are set each morning (weather dependent) and collected at the end of each day.

The tags include externally fin-mounted satellite tags and internal acoustic tags. This NSW Government tagging program is thought to be the world’s largest.

SMART drumlines are being rolled out via the 2021/22 NSW Shark Management Program, at nearly every coastal Local Government Area. There will be 170 SMART drumlines, from Tweed to Bega, when the program is fully operational.

Along the NSW coast, there are 21 shark listening stations.

Also known as VR4Gs, these receivers are capable of detecting the presence of tagged animals within a 500 metre radius. They provide real-time updates of tagged sharks close to key swimming/surfing locations.

Captured information is transmitted to satellite and broadcast to the public and beach authorities via Twitter @NSWSharkSmart and the SharkSmart app.

Data from the network of listening stations also provides important insights into the movements of sharks.

Several hundred VR2W listening stations located on the ocean floor record additional data. Although this data retrieved in real time, it provides further details about shark movement, habitat use, and factors affecting shark distribution and their interactions with humans.

The SharkSmark app provides useful tips to minimise the risk of shark encounter and will feature relevant advice, information and real-time alerts.

Download the SharkSmart app for iOS from the iTunes store.

Download the SharkSmart app for Android from Google Play.