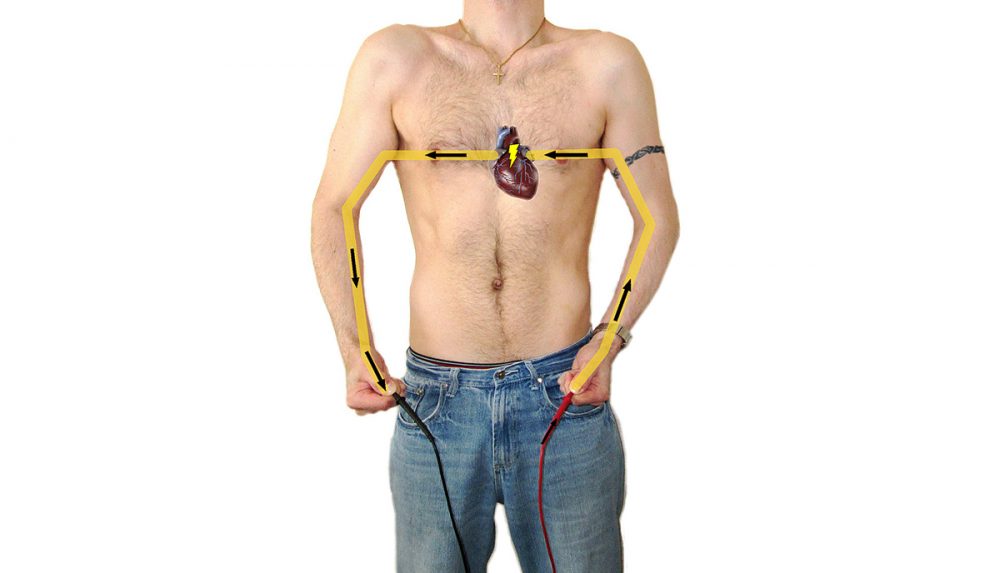 How do you treat an electric shock?

Follow these steps to help minimise the impact of electric shock:

What are the after effects of electric shock?

Electric shock kills 76 Australians every year. This figure from the Australian Bureau of Statistics does not account for people whose unfortunate electrical mishaps either go unreported or lead to non-fatal injuries.

It’s vital to be able to identify the symptoms and to safely provide appropriate treatment.

Electric shock — where an electric current passes through the body — can result in external and internal tissue and organ damage.

The symptoms of electric shock depend on the severity of the shock (see below), but can include:

Compartment syndrome is another internal medical issue caused by electric shock. It leads to a serious swelling of the limbs from muscle damage and may not be evident directly following the shock, but appear several hours later.

What determines the severity of electric shock?

Electric shock from household appliances is all too common, sadly. Shocking conclusions have resulted from prying fingers, utensils, even mouths.

But what determines the severity of an electric shock from any of these sources? These are the main factors:

These factors need no further explanation, with the exception of the electrical current type. Alternating Current (AC) is dangerous because it cause muscles to spasm, making it difficult for the victim to release from the electrical source.

DC power tends to involve low voltage and high current, making it even more dangerous than AC. It’s the current (amps) you need to worry about.

Alternating Current (AC) is involved in most instances of electrocution. As a result of the muscles contracting, arms and hands tend to wrap around or clench objects. The person being electrocuted cannot let go.

If you were to touch the person being electrocuted, you too will receive an electric shock, and you may also be injured.

The best thing to do is disengage the power.

Learn resuscitation. Breathing problems and heart failure are commonly the result of being electrocuted.

You can’t predict what voltage/current will damage or kill a person. There are too many variables.

The electrical resistance of the human body varies with the amount of moisture on the skin, the type of body the person has, and the applied voltage. Sometimes it can take very little current to cause damage.

Wet conditions, or a cut or other break in the skin, significantly reduce human body resistance.

Higher voltages can break down (as burns) outer layers of the skin. This then reduces the overall resistance value.

Is it bad to get shocked by an outlet? How many volts is an outlet?

The typical 230 volt AC power point in Australia is single-phase and rated 10 amps. This is more than enough to kill.

A 10-20 milliamp current applied to the back of a person’s head can be fatal. The journey the current takes through the body can determine the extent of injury. A current passing from hand to hand (not uncommon) is likely to impact the heart.

Time is another factor. The longer the electrical exposure, the more likely the chance of injury, including burns and irreparable damage.

High voltages are dangerous because they can create a lot of current and because the electricity can jump large gaps.

Can an electric fence kill you?

Electric fencing has a very low current, regulated so as not to endanger life. It’s the amps that kill. And an electric fence is usually set to around 120 milliamps.

Electric fence energisers put out around 8,000 volts, which gets the attention of the targeted stock animals and leaves a clear mental imprint. The low amperage of around 120 milliamps (120 thousandths of an amp (normal residential power is 10-13 amps) shouldn’t harm a squirrel.

The current in an electric fence also pulsates. This means that muscle contractions are only transitory, giving a person (or animal) a ready opportunity to get away from the source of electricity.

Here’s where it gets risky though…  if you (or an animal) were to become entangled and receive multiple shocks over a long period (minutes to hours rather than seconds), serious injury and even death could result.

Climbing through or under an electric fence is not a good idea either. Not because of the risk of becoming entangled, but because your head or neck could easily come in contact with the electrified wire or tape. We warned earlier about the dangers posed by an electric shock to the head.

For these reasons, children should be kept well away from an electric fence.

How do you recover from shock?

There’s a high probability that survivors of electrocution will suffer permanent nerve damage, if not further damage to life and limb.

Up to this point, we’ve been talking about electric shock. There is another kind of shock. It too, can be fatal.

Shock of the other kind results from blood pressure falling so low, there’s not enough oxygenated blood to sustain the body.

Shock is often fatal when left untreated. Regardless of treatment, survival prospects are not good following shock after a massive heart attack, especially for older people.

If you suspect someone has gone into shock, immediate treatment is imperative. The first step is to call 000 for emergency medical assistance.

Any bleeding needs to be stopped. The patient should be laid down, kept warm, their legs elevated to return blood to the heart.

When the paramedics arrive, fluids may be given intravenously to raise blood pressure. Drugs may be administered to boost blood flow and encourage the heart muscle to contract.

A blood transfusion, as well as oxygen, may be needed.